The Chinese had discovered porcelain as early as the Tang dynasty (around 750) and for a good thousand years, the secret of porcelain had fascinated the West world. 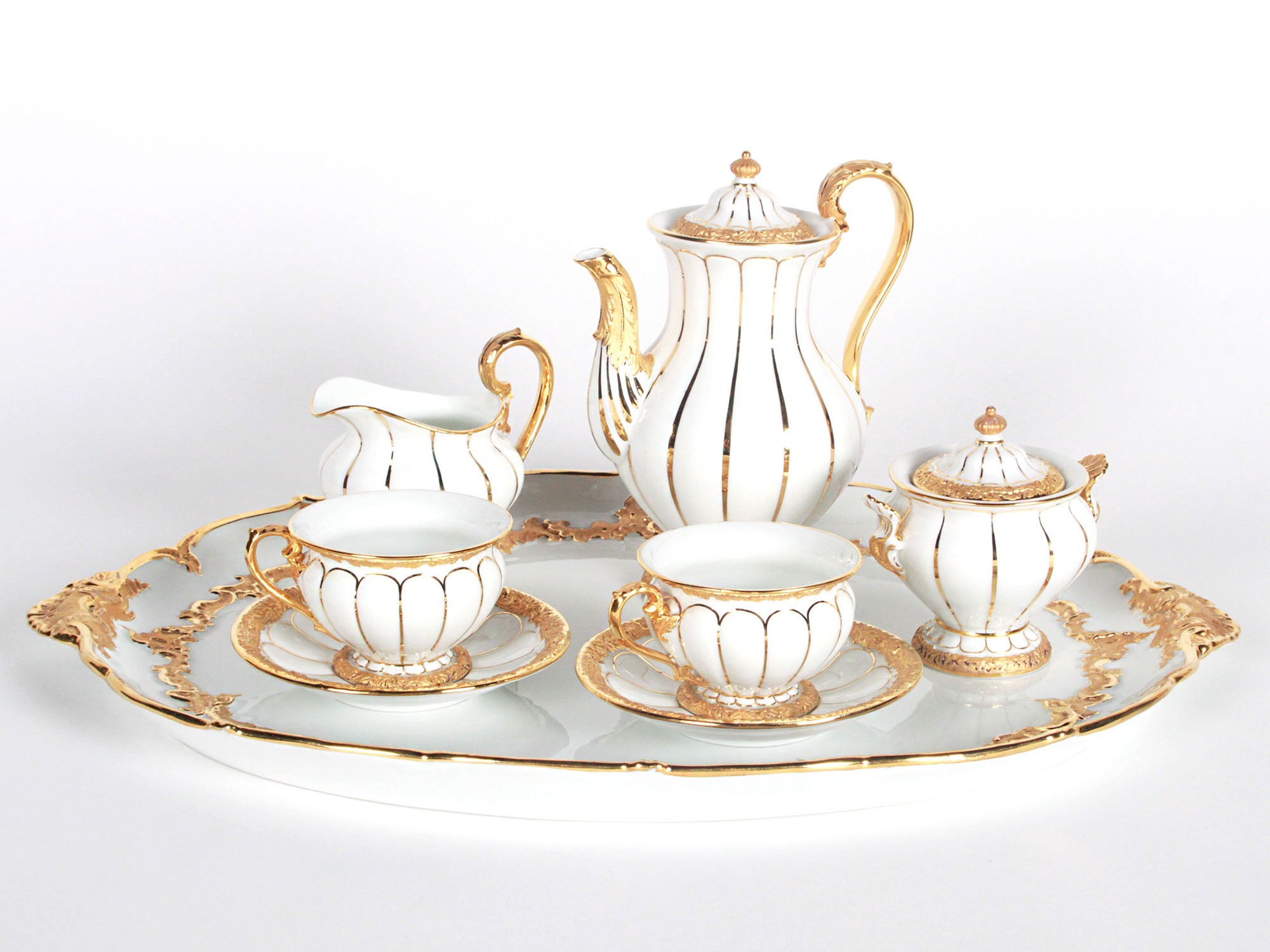 Considered as the ‘white gold’ of the 18th century, porcelain was desired by the greatest princes of Europe and at that time, Europeans were importing porcelain from China at prices that were incredibly high.

Various attempts around Europe were made to try and reproduce Chinese porcelain, the most successful being that of the Medici in Florence in the 16th century.

Well-kept for a thousand years, the secret of Chinese porcelain manufacturing was finally revealed in Meissen near Dresden, Germany in 1708.

Everything changed at the beginning of the 18th century, thanks to Augustus the Strong (Elector of Saxony and King of Poland) who was particularly fond of porcelain.

The man had seized an alchemist, Johann Friedrich Böttger, who claimed to have the recipe for the philosopher's stone that transformed everything into gold. Alchemy was still very widespread at the time.

In 1708, the alchemist Böttger and the scientist Tschirnhaus, commissioned by the Augustus the Strong, developed the manufacturing process:

A certain dosage of kaolin, alabaster and quartz heated to over 1300°C.

The first porcelain in Europe was thus born, using the kaolin available in Saxony, Germany.

This was the beginning of a craze throughout the West. Meissen became internationally known for the production of Meissen porcelain, which in 1708 was the first porcelain produced in Europe.

The Prince registered the patent in 1709 and began the production of porcelain in the Albrechtsburg Castle in Meissen in the greatest secrecy, on June 6, 1710.

The factory would go on to produce the first ever pieces of European hard-paste porcelain.

The fortress kept the secret of Meissen porcelain production for many years, and every precaution was taken to prevent the revelation of the creative processes of porcelain and to guard the raw material.

Meissen porcelain in Europe quickly became a craze, and real money flowed into the Saxon treasury. The name of the city, ‘Meissen’ becomes a registered trademark of the state porcelain world-famous factory.

Due to the high quality and vivid colors of the items, the products of the Meissen manufactory quickly gained worldwide fame. Incidentally, about 40% of Saxon porcelain was acquired by nobles of the Russian Empire.

Characteristics of the Exceptional Meissen Porcelain

The Mark of Meissen porcelain has become the standard for the highest quality and unsurpassed decoration for many years.

It has the appearance of two crossed blue swords, just like on the back of his plate:

The crossed swords are used to honor the coat of arms of the industry's patron, August II of Saxony.

The three centuries of production highlight the cosmopolitan and multicultural influence on the artistic development of Meissen porcelain.

As we mentioned earlier, Dresden is a town very close to Meissen, and the style of Dresden porcelain is quite similar.

Here’s a Dresden candy bowl in open work porcelain with flower ornaments. As you can see, it also features flower motifs: 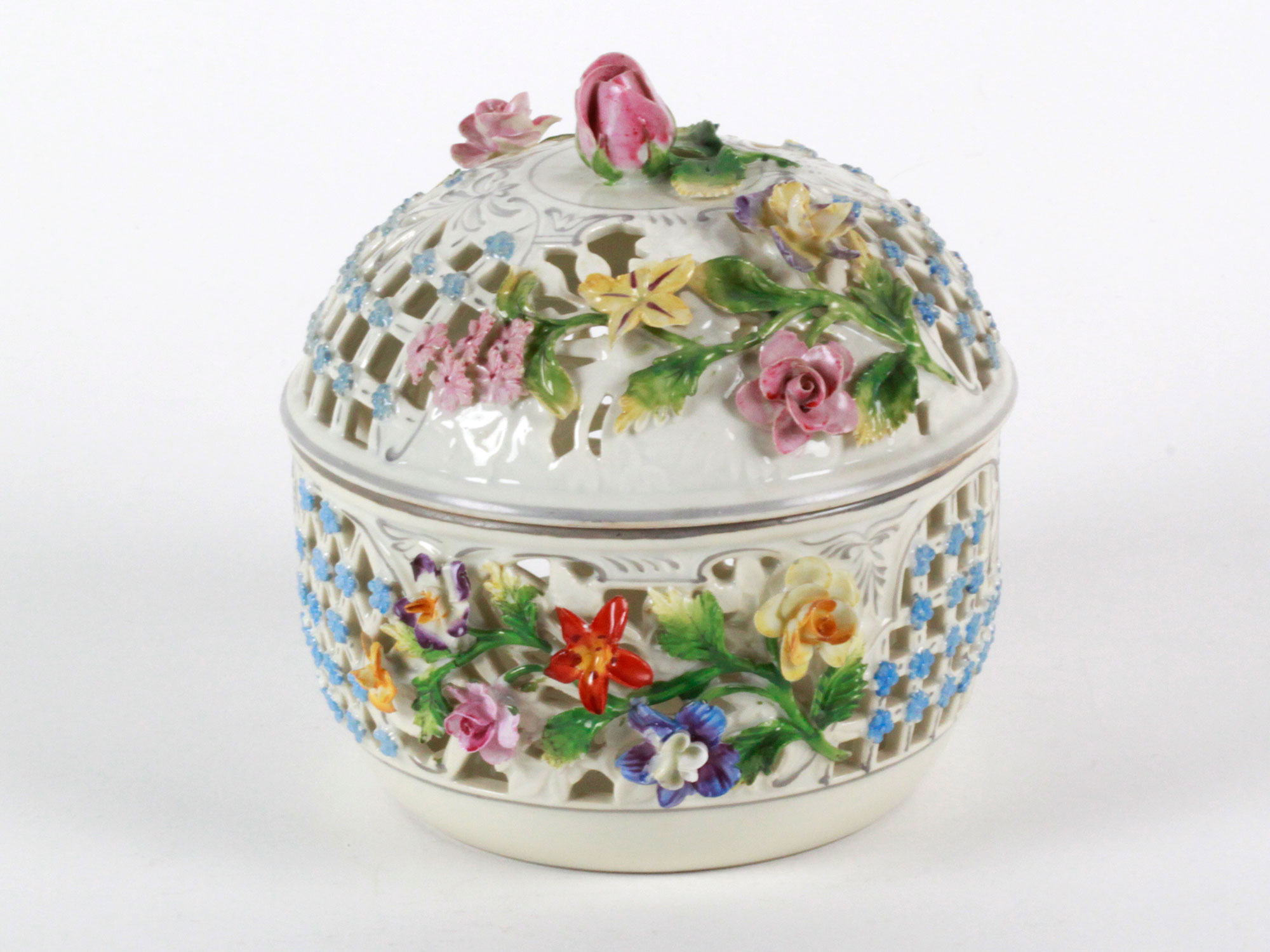 The terms Dresden and Meissen are often used interchangeably to identify German porcelain produced in the Saxony region of southeastern Germany, but the marks used on the bases are different.

Dresden artisans used a blue crown mark, such as this one:

The European discovery of porcelain coincided with the spread of artistic styles such as the rococo, and Dresden porcelain decorators were the first to use the style on tableware.

To give you an idea, an exceptional Dresden porcelain item would be this pot-pourri with a cherub on top of its lid, in blue Sèvres color and finely painted decoration of gallant scenes. 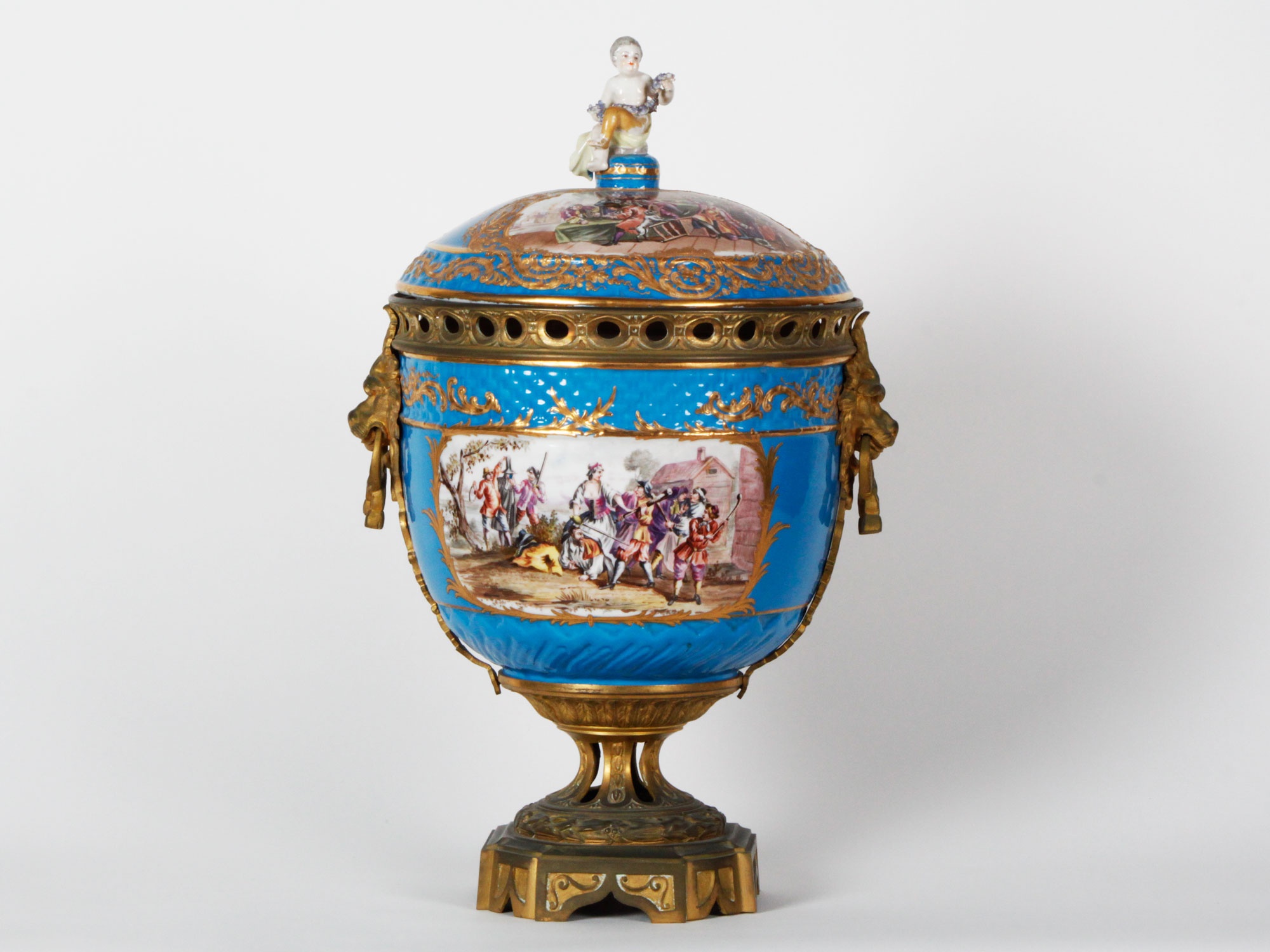 When Augustus the Strong passed away in 1733, he had a collection that consisted of more than 20,000 pieces of porcelain.

In addition to the late King's old collections, his son acquired dinner services that numbered about 3,000 porcelain pieces.

Today, that collection of around 23,000 porcelain objects is on display in the Dresden Porcelain Museum, located in the Zwinger Palace.

It is open to the public and is highly recommended for porcelain lovers to visit it.