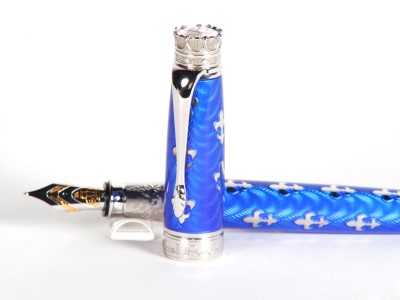 In 1885, the Russian Emperor Alexander III ordered from Fabergé a decorative egg as an Easter gift for his wife. The couple enjoyed the egg to a point that the Emperor commissioned a new one for his wife from Fabergé every Easter afterword. This is how the iconic series of Fabergé eggs began. Fabergé is different from other jewelers. Bringing the technique of enamel to perfection, unsurpassed to this day. Even Cartier was consumed with learning their remarkable techniques. For Fabergé however, creativity and imagination are most important and expensive materials do not interest him, as he claims that if the value of a product comes only from precious stones and gold, it really has no value.

Why is Michel Perchin The Most Creative Craftsman in the History of Fabergé?

Every company has a leader. In Fabergé, it was Michel Perchin. He was a genius, a master craftsman in the Russian company Fabergé between 1885 and 1903. Perchin is the man who created the imperial Easter eggs, as well as many others of the great works that became the hallmark of the Fabergé brand.

Particularly distinctive is his ability to combine gold and enamel to produce items that are both functional and elegant. The designs are based on brilliant color schemes and artistic nuances, every creation being truly the pinnacle of tasteful design and craft.

His period as Fabergé's craftsman is generally considered the most creatively innovative, with a wide range of styles from neo-rococo to renaissance. In 1888 the jeweler created his own workshop, becoming the master craftsman of Fabergé, and received the personal seal of the master with his initials in Cyrillic "MП”. In 1900, more than 50 apprentices worked in this workshop. The most complex and important orders are performed there - mechanical toys, watches, frames, and works of art made of precious metals. Almost all imperial Easter eggs are produced here.

The imperial eggs bring world fame to Michel Perchin, who personally participated in their creation. Each egg takes about a year to be crafted and usually recreates life in the royal court. The eggs were ordered by Emperor Alexander III and Emperor Nicholaу II. In 1885, Michael Perchin created The hen egg, commissioned by Emperor Alexander III as an Easter surprise for his wife Maria Fedorovna. It contains a golden chicken in which is hidden a crown of gold and diamonds. 1897 is the year in which Perhin created the most famous of the imperial's eggs - Coronation. The surprise in it is exactly a 10 cm copy of the imperial carriage of Catherine II for the coronation of Nicholay II. The egg is covered with gold and decorated with diamonds. A total of 28 of Fabergé's 54 imperial Easter eggs were created in Perchin's workshop, who continued to create jewelry until 1903 when he died.

In the chaos of the October Revolution in 1917, many of the eggs disappeared. They were later found in a state warehouse and most of them were sold. Many of them were bought by Armand Hammer. The Forbes collection includes 11 imperial eggs. Today, many of Fabergé's eggs are in various collections in the United States, five are in the Virginia Museum of Art, three in the New Orleans Museum of Art, and three are in the possession of Britain's Queen Elizabeth II. This is the story of the jeweler Fabergé and his eggs, in which his craftsman Michel Perchin has a basic role as a creator of priceless works of art.

Michel Perchin’s pens take creativity and quality to a whole new level. Their tasteful and unique designs take us back to a time of elegance and refinement almost unknown today, in this age of mass production. No cost is spared in materials or workmanship and the outcome is an exquisite and worthy statement to be given down from one generation to the next.