The founder of the S.T. Dupont brand, Simon Tiso Dupont, has been enchanted by luxury since early childhood. This is understandable, knowing that he grew up in the court of Emperor Napoleon III, and had been his photographer at just 25 years old, building up quite the keen-eye for luxury and a brilliant grasp of Parisian fashion sense and design.

The history of the world-famous brand S.T Dupont began in 1872 with the production of wallets, suitcases, and bags of high class and genuine leather. Soon after the 1st world war, the S.T. Dupont was given to Simon’s sons, who continued the tradition of creating luxury leather goods, expanding the company’s business activities and creating lighters, pens, and cuffs.

Indispensable companions of well-off businessmen and wealthy tourists, Dupont cases and travel bags are a symbol of good French taste everywhere. The use of a particular varnish gives their pieces a great finish, durability, as well as the appearance of rich and vivid colors; the formula for its creation is kept secret to this day.

Dupont Creates the First Gas Lighter in the World.

In 1941, S.T. Dupont presented to the world something completely new - a luxury gas lighter.

Starting with just a small set of smoking accessories made by Maharaja from the Indian city of Patiala, the company achieved great success that exceeded all expectations.

The prototype for the shape of the first gas lighter was the skyscrapers of New York City, with a color given by the previously mentioned special varnish, and additional brilliance provided by inlays of gold, silver and diamonds. The process of creating such a lighter has hardly changed in more than 60 years; it is still assembled by hand and the quality of each of the 600 stages is carefully monitored.

In total, the production of a lighter takes approximately three weeks. For example, the most expensive lighter in the world is a recognized accessory of this French brand. The 18-carat white, gold light with 468 diamonds that adorn the case costs $74,000. The brand not only devotes a lot of time and attention to the design of the lighter but also develops and incorporates various innovative technologies. For instance, expert craftsmen and designers of the Dupont brand even create a particular sound that arises when opening theirs lighter. The specific sound that is heard when opened is a trademark of Dupont lighters.

An example of an interesting S.T. Dupont lighter would be this Leroy Neiman gas lighter, produced in 2003 by the company to celebrate Leroy Neiman, who was then viewed as the most popular living painter in America. The artist was incredibly original and was behind the modern sports genre in painting. 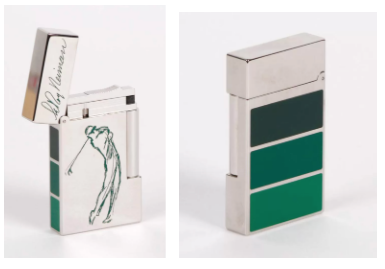 In 1972, a new range of items addition was added to the company's collections - writing instruments. It is no surprise that Jacqueline Kennedy desired to own a pen that would perfectly complement her personalized S.T. Dupont lighter, this is when the company created their first luxury ball-point, and it was a classic. Each of their pens is covered with a special Chinese varnish, which provides a silky feeling and a durable piece; we often observe hand-engraved symbols that create additional luxury. The company began producing pens made of gold, silver, platinum with decorations of colored varnishes and precious stones, which is simply impossible not to recognize even from a great distance.

It would be interesting to mention this exquisite limited edition by Dupont, that complements the lighter mentioned above, also belonging to the celebrated Leroy Neiman series. We can observe the same clean lines and shades of green lacquer symbolizing a gold course. 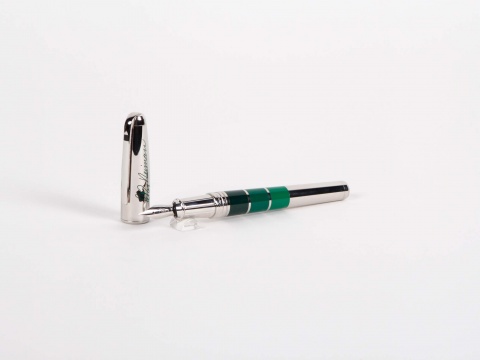 A Brand that Symbolizes Impeccable Style and Luxury

Five years later, in 1978, the company returns to its roots - the production of leather goods and within a few years released a collection of small items made of leather - bags, men's bags, and wallets.

It is nearly impossible not to recognize lighters, pens, watches that are manufactured by S.T. Dupont. For a very long time the company has reliably pushed the limits of extravagance and brilliant craftsmanship. Today, the French brand is represented in more than 130 countries and is actively involved in various collaborations with top famous designers and brands around the world.